During a pay freeze in his district, MEA member Steve Conn watched as teacher colleagues left Wayne-Westland Community Schools by the dozens. “People were having resume-building parties, looking for jobs in other districts. Some left education altogether.” 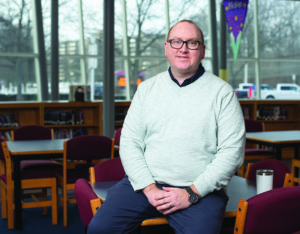 As years passed, with educators stuck on low rungs of the salary schedule, the poaching by wealthier nearby districts became so bad that even teachers who hadn’t applied for jobs were getting calls to work elsewhere.

“It got to the point where other districts just said, ‘Oh, we need a math teacher. Let’s start cold-calling teachers in Westland,’” said Kevin Marchi, a 30-year Spanish teacher in the district, member of the bargaining team, and MEA Region 2 president.

This school year, those who stayed were rewarded for their loyalty. Thanks to a regional enhancement millage passed by Wayne County voters in November 2016, the latest contract in Wayne-Westland returns teachers to the step where they would have been if they had never been frozen.

Back in 2011-12, as drastic state funding cuts forced Wayne-Westland teachers to accept a 5 percent salary cut and a multi-year step freeze, Conn was several years into his career as a high school teacher. He and his wife—a teacher in neighboring Plymouth-Canton Community Schools—had a new baby and a mortgage. Today they have a second child and about $1,800 a month in child care expenses alone.

“I had started to think I’ve got to go—and I love this job. It’s the job I always wanted. But I can’t live with money always being tight after two master’s degrees and 13 years in.”

When the bargaining team brought the new contract to membership last spring, they received a standing ovation, Marchi said. “People couldn’t believe it—one of the questions was, ‘What do we have to give up?’ The answer was nothing. People that were frozen on steps had already given up so much—we calculated some lost $130,000 during that time.”

Now some educators who left are returning to the district, Conn said. “Once again Wayne-Westland is perceived as a financially stable district, a place where you can work and raise a family, so we’re posting jobs and we have lots of people applying.”

Other priorities for the enhancement money in Wayne‑Westland included new curricula and new buses.