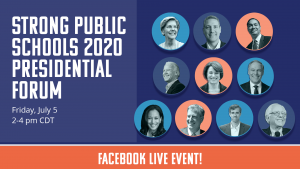 Delegates to the NEA Representative Assembly will get to hear first-hand from 10 presidential candidates who accepted an invitation to a forum at the annual event in Houston this Friday – and you can join them via a livestream of the event.

The #StrongPublicSchools Presidential Forum will occur from 3-5 p.m. Eastern time on Friday, July 5.  Learn more and RSVP for the Facebook Live event.

Candidates will answer questions from NEA members about their plans for public education including how to provide opportunity for every student, how they plan to provide the resources and tools that attract and retain educators to the profession, and how they will listen to the voices of the professionals who know the names of the students in America’s classrooms. Other core NEA issues can be found on NEA’s StrongPublicSchools.org website.

Use this Facebook event to RSVP and set a reminder to tune in live on Friday!