Chandra Madafferi is one of those people who seem blessed with extra energy the rest of us dream of having—a self-described “worker bee” who sees something that needs doing and dives in to get it done.

And there’s a lot that needs doing. 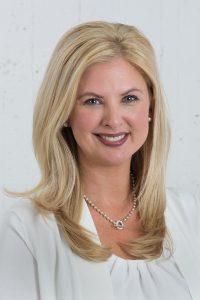 Madafferi first joined MEA as a student at Central Michigan University. She began her involvement with the Novi association as co-chair of the Political Action Committee, later assuming other leadership roles. She has served on the MEA Communications and Public Relations committee and the Membership Advantage campaign.

First and foremost on the incoming vice president’s agenda is to build MEA’s visibility with parents and other potential community partners who believe in the transformative power of public education but don’t understand MEA’s reason for being—our purpose and goals.

At a recent public education advocacy conference, Madafferi made a presentation to a room full of superintendents—using wartime as an analogy. Her first slide showed the image of a battlefield with soldiers on the front lines and tanks and commanders behind them.

“I said to them, all these foot soldiers down here—this is MEA,” she said. “The MEA soldiers have been fighting all these battles to save public education, but now we need to fight together.”

The forces of privatization that wish to turn public schools into corporate profit centers will “pick us off one by one” if the many and various supporters of public education remain isolated and separate, she told her conference audience.

“I said in a nice, assertive, strong way—‘If we go away, you’re next’”—and the Novi health teacher left the conference with names, phone numbers, and offers of cooperation, she added.

Madafferi took over as president of the Novi Education Association after the Republican-controlled Legislature passed anti-union measures, including so-called “Right to Work” legislation and other laws barring payroll dues deduction and prohibiting certain bargaining topics.

The tough times honed her negotiation and collaboration skills, and sharpened her determination to fight for educators’ rights, she said. “I’ve learned you can’t take ‘No’ for an answer and that with hard work you can usually find common ground.”

She describes herself politically as independent with some conservative leanings, a mindset she says helps her communicate with members who do not choose political candidates based on education issues first. She encourages those members to “split their tickets”—and vote in the interest of their profession at the local and state levels.

A former special education teacher, Madafferi eventually hopes to improve the types and breadth of professional development offerings MEA provides—especially to newer educators, who must meet ongoing PD requirements and need quality supports to remain in the profession.

“I have a lot to learn, but I’m excited about the possibilities,” she said.