The Bitter Taste of Rejection

Editor’s Note: For anyone worried about the state of public education—especially if worry is accompanied by a feeling of powerlessness—today’s guest post accomplishes two different goals remarkably well: It entertains and inspires.

Ken Ferguson is a husband, dad, West Bloomfield School Board trustee, and a teacher/consultant for visually impaired students in Grosse Pointe Public School System. He also is a committed MEA member who signed on to be a Political Action Leader in his region.

These last six months have made me feel like a teenager again. I have been turned down so many times, I can’t keep track! “What are you doing this Saturday?” I ask a dozen or so colleagues and friends throughout the week. “Oh, it’s a busy weekend for me,” they say, with typical responses such as family commitments, birthdays, cleaning the house, funerals. Okay, I actually understand the funeral reason. The rest are weak excuses when they are used EVERY weekend. There are two stark contrasts between teenage me getting turned down and today. Number one: I am not asking for a date. That would make my wife very unhappy. Number two: I don’t take it personally. It doesn’t feel like people are saying “no” to me. They are saying “no” to being uncomfortable. 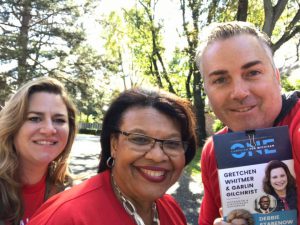 Let me explain. I have been working with our MEA on the Gretchen Whitmer campaign and several other local campaigns since the spring. In fact, there are 16 of us PALs (Political Action Leaders) throughout the state really kicking butt and trying to get our members engaged. The problem is, many of our members are hesitant to venture outside their comfort zone. Knocking on doors seems scary. Calling other MEA members seems intimidating. Writing member-to-member postcards seems…well…boring. But when you’re knocking, calling, and writing with others, it is actually fun. We need to join in all of these actions to ensure we send Whitmer and other public education friendly politicians to Lansing this November!

Admittedly, my wife and kids are not thrilled that I am gone every Saturday with #RedforEd Action Saturdays or that I am out canvassing and phone-banking during the week.  But, my wife (also a teacher) understands that our profession will not be thrilled if we get four years of Bill Schuette and Betsy DeVos destroying public education.  Educators will not be thrilled if Schuette gets in office and tries to take more money out of our paychecks, just as he fought tooth and nail to appeal rulings on the 3% case.

I just turned 47, and I had never worked on someone’s political campaign or promoted a proposal in my life. That is excluding my own campaign for my local Board of Education in 2016.  However, I had never done it for anyone else.  Wait… there was that one time I put up a window cling in 2008, which was a big deal then. The point is I understand where complacent people are coming from, and it seems hard to take that first step toward political action. Yet, once you do, you will feel a sense of engagement and accomplishment. You will feel a sense of unity that is bigger than yourself. And, come November 6, you will feel a sense of satisfaction knowing that you contributed to making our politicians Value Students, Respect Educators, and Fund Our Schools!

My motto for calling and canvassing is “keep it short and sweet.” However, it does not always work out like that.  Once, a little southern woman kept me at her doorstep for about 15 minutes talking with her and her daughter, who is ready to vote for the first time. She was so excited to speak with me because I was the first person to visit about the upcoming election and she…had…questions. I left feeling like I secured two votes for Matt Koleszar (the MEA member-teacher running for state representative in Plymouth).

Conversely, a homeowner in Commerce pulled into his driveway as I was leaving and blurted, “I want nothing to do with you or political views!” I merely smiled and said, “No problem. I’m just trying to get the word out about some friends running for local office. Have a nice day.” After I walked about ten yards, he called out, “You wanna know why?” I stopped, stood there for a second, turned around and said, “Sure.” And so the conversation began. Ten minutes later, I had informed the gentleman that as a parent, teacher, and veteran, I had some of the same concerns as him and appreciated his views. He then took my literature and guaranteed he would look into my candidates. We shook hands and parted ways. Will he vote for my candidates? I have no clue. But, he will now put a face and conversation with their names on November 6. That is a win.

I am not asking you to run a marathon. I am asking you to take the first step. I am asking you to just show up for an hour to phone-bank or be a partner for someone who likes to talk while canvassing. If those are out of your comfort zone, then show up to an event and help sign people in or pass out shirts.  Then, post a picture of it on social media. Let your friends, family, and colleagues know you are engaged to take back our profession from politicians who want to destroy public education. This is your chance to influence your job, your career, and your passion.  Make your voice heard.

Sign up here to find the best way for you to get involved!

From Discouraged to Empowered: My Story of Union Advocacy
November 8, 2019

A Message From a Mid-Career Teacher in Michigan
June 24, 2019