#RedForEd Rally: ‘We have to keep going’

Center Line math teacher Robert Boccomino retired at the end of last week after a 25-year career in education, but that didn’t stop him from showing up at the Michigan Capitol on Tuesday to fight for the future of new and aspiring educators coming up behind him. 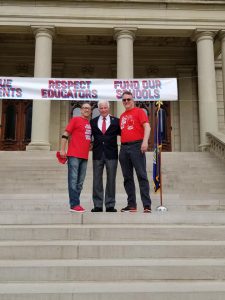 “I’m doing this for the younger teachers, because now by the time that first certificate is up for renewal—within the first six years—we lose 40 percent of our young teachers,” he said. “They just don’t renew the certificate, and they walk away from a career, which is sad.”

Boccomino used a simple but powerful analogy to explain the problem that brought more than 2,000 educators, students, parents, and other allies to a #RedForEd rally in Lansing: “You’re asking firefighters to fight a fire without a truck, without hoses. When you ask teachers to teach without tools, they burn out.”

Let’s make the next #RedForEd rally even bigger—Join us at the Capitol next Tuesday, June 25.

Rally goers repeatedly broke into thunderous chants of “fund our schools” accompanied by banging noise makers and waving signs to grab the attention of House and Senate legislators in session inside the Capitol. 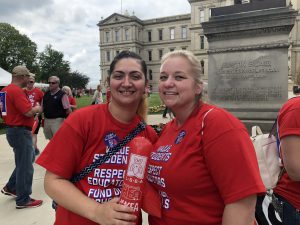 Attendees traveled to the event from across the state. Tracy Zarei-King, an MEA member from Kalamazoo, said she was glad she attended her first capitol rally after seven years of teaching elementary school.

It was eye opening to learn statistics from various studies showing Michigan’s parallel declines in education funding and performance in recent years, she said. “If our goal is to be a top 10 state in 10 years, how do we do that without the proper funding?”

Whitmer’s budget would boost K-12 education spending by $507 million to increase per-pupil allowances across the board but also to implement a “weighted formula” that allocates additional money to cover added costs of special education, career technical education, and at-risk students.

In addition, the governor wants to increase the number of residents who hold post-secondary degrees or skills certification by funding programs to retrain adult workers and to guarantee two years of debt-free community college or university for qualifying students starting in 2021.

Whitmer told the rally crowd that continuing disinvestment in education threatens the economic future of the state. “Our outcomes and our challenges are because of a failure in this building behind me – not because of our children and not because of our educators.”

Several former educators elected to state-level posts last fall in a nationwide wave of teachers running for office drew raucous cheers when they took to the podium.

Sen. Dayna Polehanki (D-Livonia), a former New Haven English teacher, said she ran for office after witnessing the negative transformation of the profession she loves over 20 years.

Teaching was once a profession where highly educated professionals could expect to receive a reasonable salary, good health care, a secure pension, and modest pay increases in pace with inflation—along with smaller class sizes and basic tools for helping students, Polehanki said.

“But now—I want you to raise your hand and yell yes if you have experienced any of these things… furlough days!”

“Yes!” came the shouts in unison.

“A pay freeze that has lasted a minimum of five years!”

“And they wonder why there is a teacher shortage!”

A comprehensive recent study showed Michigan students are being shortchanged by $2,000 per pupil, MEA President Paula Herbart said. “Part of being a great educator is using your voice to speak up for all students so they can share in the opportunity of a great public education.”

The power of public school teachers, bus drivers, custodians, secretaries, and food service workers resides in their union – in having a collective voice, said Lily Eskelsen García, who began her career as a cafeteria worker, became Utah Teacher of the Year, and rose to lead the NEA.

“This Red for Ed wave is catching fire because the public knows we’re telling the truth,” she said. “They know that we love their kids and that this is about more than a little raise in our paychecks, though Lord knows we deserve it. 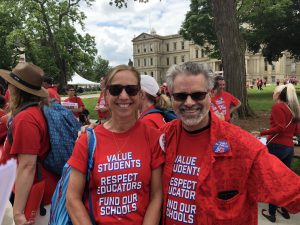 That message resonated with Randy Walbridge, an art teacher in Potterville for 23 years. Educating young people is one of the most important jobs in the country, and it is by nature a collective act, he said.

The co-president of his local union, Walbridge urged others to show up for the June 25 rally “to realize we’re stronger together and there is solidarity in demanding respect for our profession.”

In the weeks leading up to the June rallies, MEA members have been speaking with parents, community leaders, and legislators to create a coalition for change. 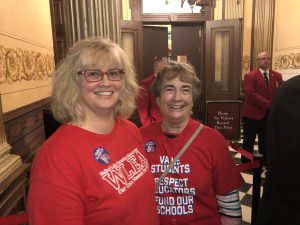 A number of rally participants concluded the day by personally lobbying their legislators, including Karen Zyczynski, president of Wayne County’s MEA-Retired chapter. “I hope that even more people will show up next week,” she said. “It’s so important.”

Two colleagues from Midland, language teachers Ana Geib and Amy Rankin, brought their pre-teen daughters to the rally to see democracy in action and extended the lesson by going inside the capitol to leave personal notes for their representative.

“We’re teaching them that your legislators don’t know what you want unless you tell them,” Geib said. 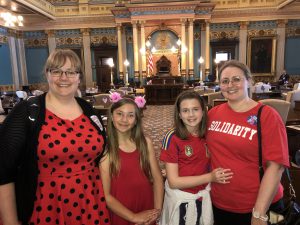 “We have to do it,” Rankin added. “We can’t give up. We have to keep going. We have to be here and make our voices heard for that change to happen. If we do nothing, then nothing gets better.”

Michigan School Finance at the Crossroads: A Quarter Century of State Control