At the second of two June education funding rallies in Lansing on Tuesday, Gov. Gretchen Whitmer called out Republican leaders in the state Legislature for taking a summer recess without passing a state budget. 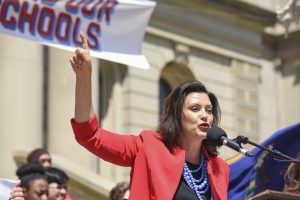 Addressing a crowd of about 1,000 #RedForEd rallygoers on the Capitol Lawn, Whitmer thanked educators for showing up for students every day – and for showing up on their summer break to press lawmakers to adequately fund public education.

“Where are they?” she asked rally attendees. “They’re on vacation right now, and they haven’t gotten their work done. The people of this state are good, hard-working people who expect their government to do right by them. That’s why passing a budget that prioritizes our kids and fixes the roads is important.”

Tentative legislative session dates have been scheduled in July and August, but those will only happen if a budget agreement is reached between House and Senate leadership between now and then, according to MEA lobbyists.

You can continue to push for Whitmer’s budget—Now that legislators are home for the summer, plan to attend their coffee hours, town halls, and other appearances. Call or send emails. Write letters to the editor of your local newspaper with facts from recent studies here and here.

Make a case for proper funding of education, and talk with friends and neighbors to do the same. 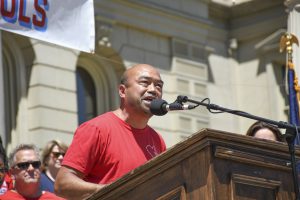 “We’ve got to start right now in a brand new direction that I am so, so, so proud to be a part of, and I am happy that you’re a proud part of it as well,” he said in a rousing speech.

Whitmer’s budget would boost K-12 education spending by $507 million to increase per-pupil allowances across the board but also to implement a “weighted formula” that allocates additional money to cover added costs of special education, career technical education, and at-risk students.

In addition, the governor wants to increase the number of residents who hold post-secondary degrees or skills certification by funding programs to retrain adult workers and to guarantee two years of debt-free community college or university for qualifying students starting in 2021.

The GOP-controlled House and Senate passed separate budget plans with significant differences between them, both of which allocate less money to schools and continue to shift money away from education toward other spending.

Numerous Democratic lawmakers attended the #RedForEd rally, including several educators-turned-legislators elected in a historic wave across the country last November, along with students and newly appointed state Supt. Michael Rice.

Third-term Rep. Leslie Love (D-Oak Park), who taught at Marygrove College and Wayne County Community College, told the crowd that educators are the most significant “first responders” in the state.

“When people think of first responders, they think of police and fire and EMS, but I think of educators like us! You are what makes education great in this state, and it’s time that this legislative body honors you with the same type of commitment and tenacity and resilience that you show every day.”

Dozens of MEA and AFT Michigan members concluded the rally by hand-delivering thousands of postcards written by educators across the state in recent weeks to the legislative offices to which they were addressed.

MEA member Curlada Eure-Harris is a counselor at Lansing Community College who advises first-generation college students. She shared her message that disadvantaged students she sees every day are hungry for food and opportunity.

“The funding and the programs that helped me get a college education are not available to them anymore,” Eure-Harris said.

Ann Arbor health and physical education teacher Jennifer Garcia told several Senate staff members that being married to an educator means her household has experienced every salary cut and increase to health premiums over the past several years times two.

“This state still has not recovered from the $1.4 billion in cuts to education from 2010,” Garcia said. “It’s beyond urgent. We passed urgent a while ago.”

Michigan School Finance at the Crossroads: A Quarter Century of State Control