First-year educator Stephanie Connell briefly paused and held her head in her hands to contain the overwhelm she felt while shopping in the New Teacher Store at Rochester Community Schools last Friday. 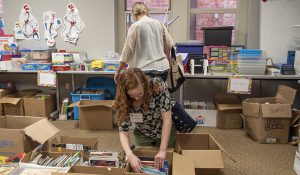 The high school English teacher and brand new MEA member was allowed to take whatever she wanted for free from a room crowded with materials donated by Rochester EA members, including books, games, manipulatives, art supplies, posters, office supplies, bulletin board materials, storage containers, and more.

“I don’t want to be wasteful,” she said. “I’m trying to stop and think and save things for other people, because I know how big this burden is.”

The New Teacher Store was started this year by Rochester Education Association Secretary Jenny Schneider as a way to welcome the district’s newly hired teachers into MEA and to help them see the union as a caring community.

“I want them to know the union is not just there for your legal rights or to fight for a good contract. They’re there to support you; it’s your support system.”

She unveiled the store at the district’s new hire orientation. Anyone who joined MEA could shop for free for as many items as they needed, she told the new staff members: “There’s something for everyone—it doesn’t matter if you’re high school or lower elementary, you can find something to help you set up your classroom!”

All of the dozens of boxes of donated materials came from other teachers in the district. “Teachers remember what it’s like starting out, and they have that heart,” Schneider said. “They want to help.”

To get ready for the year, Connell had already been out shopping garage sales, second-hand stores and Facebook Marketplace for flexible seating to make her classroom more enticing for students. Now she was filling a box with books, supplies, and storage bins.

She still needed to purchase a box fan or two to cool her windowless room, she said, and already she had spent $637 out of pocket.

First-year fifth-grade teacher Autumn Trumble didn’t have an exact dollar figure for her purchases. “I didn’t keep track, because I didn’t want to think about it,” she said, estimating her out-of-pocket spending so far at $500.

“This is such a blessing,” she said of the free store. “My car is already full, so I don’t know how any more boxes are going to fit, but we are going to make it work.”

It takes big amounts of time, money, and vision to turn an empty classroom into an inviting place for students to learn, said MEA member and Rochester English teacher Cara Lougheed, this year’s Michigan Teacher of the Year.

Lougheed said she was moved to see the impressive array of donated items and to witness the beehive of activity as the district’s new teachers dug through piles of gently used books and added more items to already teetering stacks of games, markers, and white boards.

“It’s in our nature as teachers to be generous and pay things forward,” she said.

Schneider said she didn’t know what to expect when she decided to try operating a store for new teachers – an idea she borrowed from an NEA Leadership Conference she attended last summer. She held two spring drop-off days to gather donations and secured space from the district.

Schneider spent about 20 hours gathering, moving, and sorting the materials, some of which was brand new and even unopened. “This summer I was unpacking things and saying, ‘Oh my gosh, I’ve been teaching nine years and I would love to take this—it’s such great stuff!’”

According to a 2018 survey by the National Center for Education Statistics, 94 percent of teachers spend their own money to stock their classrooms with the necessary supplies and resources. On average, a teacher will shell out about $479, although 7 percent spent more than $1,000, according to the survey.

First-year social studies teacher Nicholas Reed was grateful to find materials he was planning to buy—history and geography posters and materials, along with storage bins. “This is better than Christmas!” he declared.

Jamie Rabaut, an elementary speech and language pathologist, shrieked at the sight of one discovery in a crowded corner of the store. “Oh my gosh, white boards!” she cried.

“Jamie – wait! How many?” replied her friend and fellow speech and language pathologist, Courtney Batten.

The two friends bantered about finding supplies in the style of tributes from the dystopian novel The Hunger Games. Later, Rabaut explained she had already spent about $800 buying materials to address the wide variety of speech and language disorders she will encounter in her work.

Stumbling across a large quantity of matching mini whiteboards was an especially good find, she said. “For non-verbal children, these are good for language tasks and visually representing language.”

By the end of an hour, the store’s merchandise had thinned but not emptied. Schneider planned to open for one more day before the space had to be cleared and returned to district use. Already she was planning for next year, hoping for a bigger room to allow for furniture donations.

“It’s nice to be able to say to the new teachers, you’re not walking into an empty classroom, and you’re not alone. Your school is supporting you, your colleagues are supporting you, and we’re a welcoming community. Let’s lock arms and do this teaching thing together.”