New MTOY: How Can I Help the Profession?

Every Michigan Teacher of the Year brings personal passions to the role as spokesperson for the state’s educators. The state’s top teacher for 2019 sums up her mission in two words: professional revitalization. 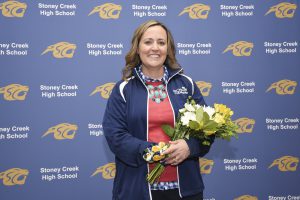 Rochester English teacher Cara Lougheed was named Michigan Teacher of the Year at a surprise school assembly in May.

MEA member Cara Lougheed, an English teacher at Stoney Creek High School in Rochester Community Schools, said as MTOY she will continue to do all she can to lift the profession so more great educators join its ranks.

“We do a lot to take great care of kids, but if we’re not taking care of the adults there’s going to be no one to take care of the kids,” Lougheed said.

The 20-year veteran began pursuing that passion in recent years through her appointment as a liaison at Oakland University, where she pairs student teachers with professional mentors from four schools in her district.

Her work in the OU program led to Lougheed’s appointment to a “congress” of the state’s higher education administrators, professors, and education thought leaders who were developing a set of high-leverage core teaching practices that should be taught in teacher preparation programs.

“These are the baseline of what every good teacher would need to be successful,” Lougheed said of the core practices now adopted and under implementation at several colleges and universities which are part of the Michigan Program Network.

“They’re listening to us at the college level,” she said.

On a smaller scale, Lougheed enjoys getting to know the new hires in her building and checking in on them periodically to make sure they’re OK. “I like going and finding out who the new person is. It’s hard being a new teacher in a new building.”

Involvement in the union has also provided Lougheed opportunities to advocate for educators. She belongs to the MEA’s Communications Committee and serves as a Michigan delegate to the NEA Representative Assembly.

“A lot of my work is focused on how I can help the profession.”

Her first love, of course, is being in the classroom. She loves spending her days with teenagers, and she wants every student to know she cares about them and likes them.

“I’m not perfect at it, but I just want them all to know that they matter,” she said. “And I love finding new ways to engage them. The best thing is when you hear a kid say, ‘That was fun; this was a good day.’”

The work can be heartbreaking, too, she noted. “But when it’s good, it’s so good.”

She feels fortunate to work at a supportive school where she was a member of the founding faculty in 2000. Her colleagues are willing to help with everything, not just in terms of sharing content or lesson plans.

“It’s also about things like I’m running late to my first hour and someone says, ‘Oh, here, let me make those copies for you.’ People here care about each other.”

The feeling was evident in May, when the award was presented in a surprise ceremony to thunderous applause. Lougheed knew she was one of 10 regional finalists, but she didn’t guess she’d won until seeing her parents escorted to their seats.

“Instinctively, I tried to back out of the gym,” she joked. “I don’t mind being the center of attention, but that was a lot for me.”

Once her name was announced, Lougheed stood at the podium next to Interim State Supt. Sheila Alles, who explained to 1,500 students, faculty, and guests about the important advocacy role the winning teacher takes on.

When Alles spoke about the important voice she will have in speaking to state and federal lawmakers, Lougheed drew giggles from the crowd by rubbing her hands together in a gesture that said, I can’t wait to get started. 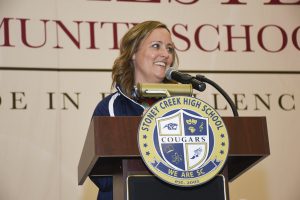 Lougheed plans to use her MTOY platform to advocate for the profession.

Lougheed will carry the award for all educators, said her father, Larry Hice. A self-described “old conservative,” Hice said he and his daughter don’t agree on much politically, but on the need to provide educators with better pay and respect, “We are in complete alignment,” he said.

“The disregard for what teachers do every day, for the effort that goes into being a teacher, and for what they do every day for the future citizens of our country has got to change,” he said.

In keeping with tradition, last year’s Michigan Teacher of the Year, Vicksburg’s Laura Chang, was on hand to give Lougheed a few words of wisdom. An elementary teacher and district instructional leader, Chang said her first piece of advice to Lougheed was to “slow down and enjoy the moment, because you will remember it for the rest of your life.”

Once she gets her bearings, Lougheed should take advantage of every opportunity that comes along to represent teachers and students with policymakers at the state and national levels. The trajectory of her career has now changed, and she should accept and embrace it, Chang said.

“Through this year, I realized that I’d been wearing shoes that were too small for a long time,” the 2018-19 winner said. “My shoes finally fit now, and I’m ready to run. She’ll realize it too, that she was chosen for a reason and she was born to do this.”

As MTOY, Lougheed will lead Michigan’s Teacher Leadership Advisory Committee, which includes the other nine finalists, in working with MDE and other policymakers on solutions for pressing education issues.

In addition, she will serve as an advocate for educators with a non-voting seat at monthly State Board of Education meetings, and she will serve on Gov. Gretchen Whitmer’s new Educator Advisory Council beginning in August. Lougheed will be Michigan’s candidate for National Teacher of the Year.

In a statement, Whitmer praised Lougheed for inspiring students and colleagues alike during two decades of service.

“Michigan is a great state because of the dedicated teachers like Cara who work tirelessly to make sure their students get a great public education,” Whitmer said. “I’m proud to congratulate her on her outstanding service to our state, and am committed to making sure Cara and teachers everywhere are treated with the respect they deserve.”

Related: I will never stop loving/recommending/fighting for my profession.