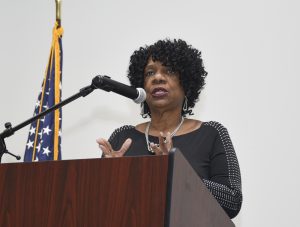 “It would not be unusual to hear one of our colleagues say I am justa bus driver, I’m justa secretary or I’m justa custodian,” the recently retired MEA Northern Zone Director told attendees at the ESP Statewide Conference in Port Huron last week.

“Don’t let anyone tell you or imply that your position is any less than any other position or your employment is not valuable,” Williams said in the keynote address at the conference’s Friday night dinner. “Remember—you are more than a Justa!”

“Do you know what kind of power you have as an ESP?” she asked the crowd. “Do you know that it would be virtually impossible for a school district to operate without you? Believe the work you do is imperative; it is necessary for the success of everyone involved.”

Her point was reinforced by another messenger—Gov. Gretchen Whitmer, who said she traveled to Port Huron for the conference because she understands the importance of school support staff.

“Everyone who is a part of the school community is important to the education of our kids,” Whitmer said. “Everyone in this ecosystem makes a difference, but in Michigan we have for too long let leaders who don’t believe in public education set the agenda.”

She urged conference-goers to contact their state representatives and senators – both Republicans and Democrats – in support of her budget plan. Whitmer’s proposal would restore $507 million in education funds by raising the gas tax to pay for road repairs.

Over the past several years, the School Aid Fund has been raided to pay for other priorities, such as roads. Whitmer told the audience that increased revenue and additional spending in her plan are connected, so you can’t be in favor of investing in education without backing a plan to pay for it.

“I’m tired of leaders who give us half measures, who play a shell game with the state budget, who don’t actually fix the problems they tell the public they fixed. This is not going to be an easy budget to pass, but when we do it will take Michigan from the back of the pack to a leader in education outcomes.”

Members and leaders from all over the state attended the two-day conference to take advantage of professional development on topics ranging from leadership principles to grievance processing, CPR and first aid, MEA and NEA member benefits, and understanding laws related to school work.

“It’s just so empowering,” she said. “I always come back from this rejuvenated and energetic. You’re around people that understand—they have the same gripes and the same excitement that you have, and you learn so much from bouncing ideas off of each other.”

Library media technician Jake Reno was attending his first ESP conference after going to other meetings and trainings put on by MEA in his five years working at schools in St. Clair Shores. As treasurer and membership chair of his local, he hoped to pick up organizing and bargaining tips.

“We just negotiated a contract, and we had some victories there,” he said. “But I’m curious what kinds of things other ESP negotiate in their contracts that maybe we could look to do in two years.”

Reno said he personally speaks with new hires and asks them why they wanted the job, and he often hears the same answer. It’s one he can relate to, and that makes it easy to talk about why joining the MEA is important.

“It’s always a passion for education, a passion for working with children, and I tell them your union is the biggest proponent for providing a high-quality education for every kid regardless of their demographic. This is what we can do together through our collective voice to further that goal.”