Rolonda Gleason is a secretary at Ferris State University. The Alaska native knows what it’s like to work without a union, so now she’s a one-woman MEA welcoming committee. 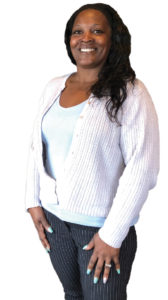 What work did you do before coming to FSU? I was a support-staff person at the University of Alaska and worked closely with the School of Ed where we recruited teachers for the state of Alaska. And there the faculty had a union. They always had better healthcare because they could bargain. But when support staff tried to get a union, it was almost impossible. For seven of the 13 years I was working there, we tried and tried. My question was, why does a certain category of people get representation but the other can’t?
What was the result of not having a union? When administration changed and your director changed, the support staff changed. They brought in who they wanted. And there really wasn’t a process for retaining your position or your job. There was not a process to say, “This isn’t right,” or, “Do I have options?” I had a really good director but when she left, everything changed. The new director brought in their own support staff and slowly whittled away those they didn’t want, or they changed people’s roles on a dime. It felt like support staff people were expendable.
What brought you to Michigan? My husband is from here. We have a blended family. His kids are here, and I have four boys. My third child graduated, was done with school, going on to college. And then I have a younger son. So I thought this is a good time if we’re going to do this.
Did you meet in Alaska? Yeah. He was a heavy equipment operator there. Actually he installed my cable. That’s how I met him. And we were coming to Michigan every year after I met him and that was 13 years ago. I’ve been with Ferris now for almost six years.
What’s it like trying to recruit teachers to come to Alaska? Alaska is kind of unique, and we have a lot of remote areas where the culture is different. It’s not that regimented kind of Western way of education. At certain times you’ve got to go with the flow of the land. So we recruited from other places, including Michigan, but the state also put efforts into getting Alaskan Natives from the villages interested in education. Actually I don’t know if they still have it, but we did have a program to get Native Alaskan children into education and the state would pay for their schooling as long as they brought it back home.
How did you start welcoming new hires at FSU? I was always pro-union because I signed up, but I didn’t really know what it was about. I didn’t know how it benefits me as an employee. Then I got voted in as a delegate for the RA (Representative Assembly) and I was like, Okay, besides big global things like discounts, let me try to make this more applicable. What does MEA mean to me here? I like that it’s such a real community. I like that I have a process. I feel confident. That’s why I took on this role of welcoming anybody new that starts in the CTA (Clerical Technical Association) to let them know there’s options; you do have a union here, and this is what it can do for you.
What has the union meant to you? The union did something for me that was awesome. My son got really sick and we had to go to Portland for a specialist for three months. I was just going to put in my resignation, and one of my union reps said, “No you’re not.” The union worked it out so I had nine-month contract that year, so I could be off all that time and come back in the fall. That was wonderful because I needed the insurance for my son. I was just so thankful.
What do you do to welcome people? Sometimes I bake cookies. I’ll present them with a packet of information on our area reps, who’s your rep for your particular area. Of course, it gives them information about MEA, but we also wrote up a sheet about what the union means to you here at Ferris. I just try to talk to them and let them know we’re here to help. Like I said, from what I’ve seen, it is a no-brainer to have that due process when it comes to my job, and feeding my kids, and having equity. If you make it so it’s tangible and someone can apply it to their life, it’s meaningful.