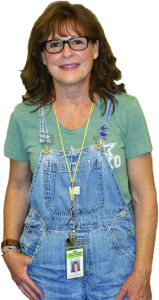 In 22 years, the K-2 paraeducator working with students on the autism spectrum in West Bloomfield—has seen good (kids) and bad (cuts)

What’s your typical day like as a paraeducator in a special education classroom?

I supervise cars in the drop-off line in the morning, so I get to see all the good-byes and well wishes, like, “Be a good role model.” Or “Do your best; make me proud.” Now I’m a grandmother, so I know those words are really important. Then we go into our room, do bathrooming, pledge allegiance, and announcements. I take two children into a general-ed second-grade classroom for about an hour and a half and then come back. We do centers, and I take more kids out, and then it’s lunchtime. The same thing happens in the afternoon. We also have our own programming going on for kids not doing as much inclusion.

What rewards do you see working with kids for up to three years?

We have one little girl who just last year would have temper tantrums, throwing herself on the floor, screaming and yelling. Every time there was a transition or something new, not able to communicate what she was feeling. But this year, we rarely ever saw it. When you see them being better able to function in ways most people take for granted, it’s awesome to see.

We hear increasing reports of students acting out in physical ways.

In special ed, we’re used to it, and we’re trained in CPI, which is non-violent crisis intervention. We learn de-escalation techniques. But you’re seeing more in the general-ed population, and not all those teachers are trained. Plus we have less paras. A few years ago we had general-ed and special-ed paras. And the general-ed paras did all kinds of work throughout the school. Now general-ed paras are gone. I’ve said this to the school board: You get no better bang for your buck than a paraeducator who gets groups of children and reads with them or does math or addresses behavior problems. Instead, we might have the speech teacher or child psychologist, social worker or reading consultant spending time in a hallway with a disruptive child.

If you had the ear of policymakers in Lansing, what would you say?

It’s ridiculous what we earn for what we do. I’m just getting back to what I made in 2008. 2008! When I hired in, we had wonderful healthcare benefits, but nowadays we pay for healthcare, too.

What is your take-home pay in relation to 10 years ago?

I try not to think about it. I take out some money for when I retire. My husband and I are going to try to pay off our house with it, so I pull out $75 every two weeks. Between that and health care, what I see every two weeks is $400. The healthcare is a good portion of what’s coming out.

What is the biggest change you’ve seen over your career?

It’s all the testing teachers have to do on kids. It’s constant. And now they’ve got to test them on computers, and some kids don’t even know how to use a mouse. So how do you get accurate scores? I get how you need a way to keep track of what a child has learned, but it seems like we’re going overboard with all the testing. To prove what? That we always need to improve?

Would you do it all again?

Yeah, I’ve been so fortunate to work with wonderful staff who are there for each other. When it comes to teachers and paras and others who work in schools, they’re for people. I think teachers are so underrated in this state. I just wonder if the public truly realizes what a teacher does for a child? Building a person? And when I hear incredible teachers saying they’re not sure if they can continue to teach because there’s a lack of respect—sure, a lack of pay, but also a lack of acknowledgment of what their job is… it just makes me emotional, you know?