During college, MEA member Anthony Pennock worried about whether he could ever be accepted as a gay man in the classroom. Now the sixth-year special education teacher is co-chair of MEA’s new LGBTQ Caucus. 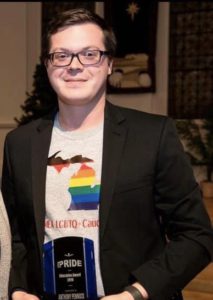 Pennock believes in “the power of one.” One teacher. One counselor. One bus driver. One librarian. One accepting, caring adult in a school building can help an LGBTQ student feel safe.

However, “safe” isn’t the only goal for LGBTQ students, the Battle Creek Education Association president says. “We’re learning now they need to feel included. That’s about the curriculum piece—being seen in the literature, for example—but it’s also about activities, like are they able to go to prom with who they would like to go to prom with?”

The new caucus will provide guidance, resources, and support to MEA members who want to learn more and do better. It came about because a group of LGBT teachers and allies realized educators needed help to understand the struggles of students and staff who identify as LGBTQ.

Students who don’t feel included and supported tend to disengage and under-perform at school. “Sometimes it can lead to mental and emotional issues, as well as substance abuse, because they’re struggling to find out who they are,” Pennock said.

Where needed, members of the caucus might be willing to meet with district leadership in cases where lack of awareness leads to unsupportive culture, practices, and curriculum. Including diverse books and stories about LGBTQ people is not provocative, he said.

“It’s telling the story of other people. It’s human experience.”

With growing social justice awareness and activism happening nationally, and movement toward viewing identity through a lens of intersectionality, “We needed to come together to address the struggles that our students and our staff members had with their own inclusivity,” Pennock said.

The sessions were well attended, he said. More recently, a caucus-facilitated, SCECH-eligible virtual book study around the title, Safe is Not Enough: Better Schools for LGBTQ Students, filled up in just a few days. The book study is organized by MEA’s Center for Leadership & Learning.

“We think we’re being well received not only because it’s a hot-button issue, but because people genuinely want to help their kids and help each other, and having the knowledge is a good way to do it,” Pennock said.

Building membership is more difficult, he said, adding: “The pandemic has not helped.”

Membership is open to any MEA member or staff member, including aspiring educators and MEA-Retired. Annual membership costs $15 for the state-level caucus only, or $40 covers membership in both the MEA and NEA caucuses.

Email mea.lgbtqcaucus@gmail.com to be sent the membership form. The formation of the caucus was approved by the MEA Representative Assembly in April 2019.