EAST LANSING – The Michigan Education Association and its Board of Directors are pleased to announce the hiring of Mike Shoudy as the next Executive Director of the state’s largest school employee union. 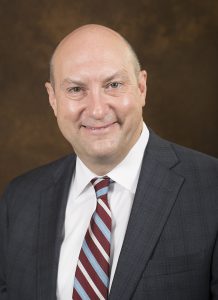 Shoudy has served as MEA’s General Counsel since 2014.  Prior to that, he spent 14 years as an attorney and shareholder at the White Schneider law firm, where he represented MEA and its members in a variety of legal matters.

“Mike has spent his entire career as an advocate – both in and out of the legal arena – for MEA, our members, and the students we educate,” said MEA President Paula Herbart.  “In his role with MEA, Mike has helped build a bridge between excellent service for members and the organizing culture we need in order to meet our goals.”

A strong believer in public education, Shoudy graduated from public schools in Fulton County, Georgia, and went on to earn his bachelors and law degrees from Michigan State University.  He served as an adjunct professor for six years at Western Michigan University Cooley Law School, where he taught collective bargaining and workplace and employment discrimination law.

“Whether it’s been high-profile cases like the recent 3 percent victory or quietly ensuring that a school employee’s rights have been protected from unfair actions, I’ve always been proud to fight for educators,” Shoudy said. “As I step into this new role, I’m excited not only to continue advocating for educators and what they need to help students succeed, but also to help them raise their own voices in defense of their profession and the promise of public education.”

Current Executive Director Gretchen Dziadosz will be retiring from MEA effective Feb. 28 after a 35-year career with the association. Shoudy will formally assume his new role on March 1, but will begin working as soon as possible with Dziadosz to ensure a smooth transition in the executive director role.

“I want to thank Gretchen for her dedication to MEA throughout her career, and especially for her exceptional work these past six years as executive director, while our union tackled some of our toughest challenges,” Herbart said.  “I’m confident that thanks to her efforts and with Mike in his new role in our leadership team, we will continue to be a strong voice for Michigan public education.”