From newspaper editorial pages, to social media hashtags and MEA’s petition drive, our members are raising their voices against calls by President Donald Trump to arm teachers – especially given that such a proposal has already passed the state Senate in Michigan. 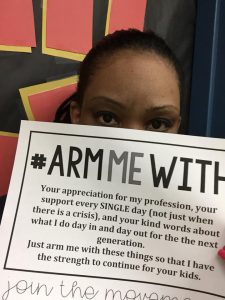 Jessyca Matthews is one of many MEA members engaging online with the #ArmMeWith movement.

Glen Young is an 18-year English teacher at Petoskey High School, secretary of the local union, and a freelance writer and sportsman. He’s also a gun owner opposed to allowing school employees and others to carry concealed weapons in schools.

After watching a meeting between Trump and school shooting victims and their family members last week on television, Young drafted an open letter to the president and pressed for it to be published as a guest column in the Traverse City newspaper.

“Unless we find a way to limit access to semi-automatic and automatic weapons, keeping them from citizens bent on mayhem, all the handguns in the country in the hands of all the teachers in our schools will not prevent the next mass shooting,” he wrote in the column.

Young said he moved quickly to write and deliver the editorial to the newspaper to capture the momentum in the conversation. It’s important for MEA members to speak up, because the trained, experienced classroom professionals need to be heard, he added.

“I think a great deal of the noise surrounding the problem of school shootings and how teachers might or should be involved in addressing the problem is driven by folks who spend no time in the schools, so are misinformed often about the practical ways suggestions like this might look in classrooms and hallways and other school spaces.”

Several thousand people have signed MEA’s petition against allowing concealed weapons in schools, but we’re looking to increase that number – and deliver loud and clear messages from our members and parents.

The petition asks respondents to share real solutions educators need to be armed with instead of guns. So far, suggestions have included smaller class sizes to allow for more individual attention; a ban on military-style assault weapons which have no place in the hands of civilians; more resources for families and students to receive counseling and other support services.

That plea is echoed again and again in the MEA petition:

“I have had students who were very clearly disturbed individuals (some even diagnosed with conduct disorder), but we were unable to get these students proper placement, services, or treatment because of ‘budget constraints.’ There needs to be a system in place that actually works to catch these students who are falling through the cracks.”

School psychologists are trained and uniquely qualified to play that role, but they are stretched too thin in Michigan and elsewhere, according to Erin Henze, an MEA member and associate professor of psychology at University of Detroit Mercy.

The National Association of School Psychologists (NASP) recommends a student-to-school-psychologist ratio of 500-700:1. However, most school psychologists are dealing with a ratio of two to three times that number, Henze said.

“The effect is that they… do not have enough time to engage in other areas in which they are well trained, such as consultation, direct intervention, and developing and implementing school-wide programs to prevent academic and behavioral difficulties.”

Many MEA members have also joined the social media movement known as #ArmMeWith. Flint social justice activist Jessyca Mathews used her platform to promote the movement, introducing her #ArmMeWith message with a yearning for educator voices to be heard and respected.

“Ask me what I want to be armed with instead of telling me. Ask me. Listen TO me. Save me from insanity,” she wrote on Facebook. The post included a selfie with her holding a placard: “#ArmMeWith your appreciation for my profession, your support every single day (not just when there is a crisis), and your kind words about what I do day in and day out for the next generation. Just arm me with these things so that I have the strength to continue for your kids.”
Now is the time to join the conversation. Sign the MEA petition to share your ideas with lawmakers, then join the national conversation happening online.