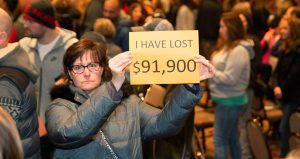 The Utica Education Association is calling on members from other locals to join in an informational picket and rally outside the Utica Community Schools Board of Education meeting at 6 p.m. on Monday, Nov. 11.

Educators in the UEA have been bargaining since March and working without a contract since June. The largest K-12 MEA unit in the state, UEA has adopted an image of an alarm clock and the phrase “It’s time” on Facebook posts, flyers, and picket signs.

Members of the UEA agreed to salary and step concessions during hard times since 2011. Many teachers are behind where they should be in their level of pay based on years of service, says UEA President Liza Parkinson.

“It’s time for a fair contract,” Parkinson said. “We’re asking for what we’ve earned. UCS is more than five steps behind in paying our educators for a total of $65 million dollars.”

This week, the union filed an unfair labor practice charge against the district, contending the administration team at the table does not have authority to negotiate.

Those who join in the picket and rally on Monday night should dress for cold weather and bring a picket sign to 14201 Canal Rd. in Sterling Heights.