When MEA member Lisa Weise first volunteered to coach a robotics team at Holt High School, she knew little about building a robot but was game for a challenge. Now just five years later, her experience and connections are helping to combat the coronavirus outbreak in Michigan. 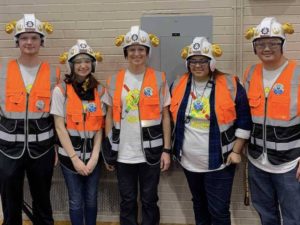 A biology teacher and 2004 Michigan Science Teacher of the Year now in her 25th year at Holt, Weise was talking with her sister-in-law – a nurse at a metro-Detroit hospital – who asked if Holt’s robotics team could design a face shield to protect frontline hospital workers treating infected patients.

“As we were talking it occurred to me another need was for goggles, and I thought I already have those,” Weise said in a phone interview. “I could just give those to people.”

That simple conversation sparked a grassroots effort that Weise started to spread across the state.

Weise contacted her superintendent, who let her in to retrieve 100 pairs of goggles from her classroom, but “Instead of mailing those goggles to my sister-in-law, I told her there is a robotics team right by you and I’m sure they’d give you goggles,” she said.

Weise reached out to that robotics coach – Bruce Stone, a manager at General Motors who coaches the Lake Orion High School robotics team. “Not only did they give her their goggles, they organized a collection and gave a bunch more goggles to the hospital.”

Weise split her own stash of the protective eyewear between Sparrow and McLaren hospitals in the Lansing area, “and now what I’ve been working on is trying to find other teams to do the same thing, because every team can be doing this right now.”

At first Weise was trying to contact hospitals to determine if they needed goggles, but soon she realized the need was universal. She shifted her focus to getting the word out to robotics teams and coaches. 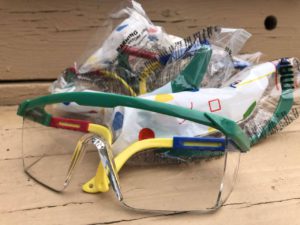 “Everyone I’ve talked to has said, ‘Yes, certainly we’ll help. We’ve got it.’ People want to help.”

Weise also reached out to Gail Alpert, president of First in Michigan Robotics, a state affiliate of the non-profit organization that sponsors competitions for robotics teams all over the world. Alpert also began contacting team mentors and alumni networks across the state.

“I said to Gail, let’s find all of the robotics teams and tell them, ‘Find your hospital. Give them goggles. They want them.’”

Shoemaker was one of the first coaches contacted by Weise, because both his program and his statewide connections are extensive. “I’m probably uniquely positioned also in that my wife is a physician,” Shoemaker said, “so we knew there was a need.”

Although Shoemaker could not get access to his closed building, he had brought home all of his 3-D printers after Gov. Gretchen Whitmer announced the statewide school closures on March 12.

Shoemaker began printing 3-D face shields from a design made available by a corporate sponsor of First Robotics, which anyone can make using a 3-D printer and a three-hole punch, he said. He also began reaching out to other coaches.

“First Robotics is a big problem-solving organization,” the 18-year veteran science and technology teacher said. “It’s an open network for people to communicate, and we always do, so it was natural for people to want to work together and solve problems.”

The spring robotics competitions have been cancelled because of the public health emergency, so Shoemaker’s student leadership team has been holding virtual meetings on Zoom to devise ways to help out the community during this period of social distancing, he said.

“We’re actually taking our tablets that we have for scouting and trying to get those delivered to some senior centers in the area, so kids can be virtual pen-pals with seniors who are shut in and might not have visitors.”

The efforts to find creative ways to help hospitals and communities returns a welcome sense of mission and purpose to their lives, Shoemaker and Weise agreed.

“I think that’s the hardest thing for us as educators is that you have this drive all the time to get kids to a certain point and all of a sudden you’re told, ‘Well, you’re not going to get to do that for a while,’ and it just takes your sails away,” Shoemaker said.

Weise has inspired her own daughters to get involved. The family is working together to sew face masks from a pattern approved by the federal Centers for Disease Control. “Any way that we can help feels nice,” Weise said.

She encourages other robotics coaches to contact the nearest hospital to see if goggles or other items can be donated.