Community mourns loss of 55-year teacher: ‘She was ahead of her time’

Something was missing from opening day in Grand Blanc Community Schools this year. 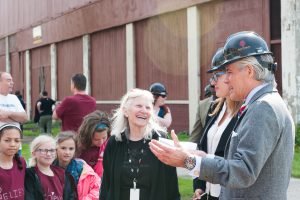 For the first time in more than a half century, MEA member Vickie Weiss was not in attendance. In June she completed an astounding 55th year teaching elementary school in the district, and in August she passed away at the age of 79 following a brief illness.

Described as a legendary innovator and “ambassador for learning” in the community, Weiss was largely responsible for creating City School (now the Perry Innovation Center) in the district nearly 30 years ago. There she was able to put her beliefs about how children learn into action.

“She was very much ahead of her time, and her legacy is going to live on long after many of us have gone,” said Grand Blanc Superintendent Clarence Garner, who was mentored by Weiss when he began teaching in 1988.

The school that Weiss started in Grand Blanc in the early 90s was cutting-edge. Students learned in multi-age classrooms of grades 1-2 and 3-5 where they could move fluidly across groups based on skills rather than age. Every student experienced being youngest and oldest in class.

The school ran on an extended year similar to what is now called a balanced calendar. Parent involvement was required. In addition, City School focused on experiential learning.

“She was never a big textbook teacher,” Garner said. “She believed that engaging kids outside of the classroom in whatever they were studying gave them a better chance of really understanding what she was trying to teach.”

For example, he said, in the last couple of years her fifth graders studied the history of Detroit and visited areas of the city being revitalized to examine the cultural impacts of redevelopment.

“Vickie was a huge proponent of public education as the one equalizer that gives all students an opportunity for a bright future,” Garner said. “She was always looking to see how we could teach kids differently so we could grow as a society.”

Pam Bachner taught alongside Weiss for seven years at City School, and their friendship endured for decades. Weiss was known to be tough because of her high expectations, “but she always gave students an opportunity to make improvements,” Bachner said.

“Every day was a fresh start in her eyes. She taught me and everyone that life is about learning.”

Weiss always came up with real-life themes and issues to build mentor texts and learning experiences around, Bachner said. For example, when the city council considered a proposed park, students read council meeting minutes, met the politicians, and wrote letters on the issue.

She brought in musicians, dancers, visual artists, and jewelry makers to demonstrate and discuss their art. “And so on. Those opportunities weren’t every three or four months,” Bachner said. “It was on a regular basis. Her wheels were always turning.”

Most importantly, she fostered relationships that made students and adults feel heard and important, Bachner said. Outside of class, Weiss coached students for 25 years in a competitive problem-solving program called Odyssey of the Mind, taking teams to World Finals five times.

She believed strongly in MEA and the importance of labor unions in fighting for the underdog and giving working people a voice, Bachner said. “She had a way of rallying people. I mean, if she said to put on a red shirt and show up on the corner, we did.”

Hundreds attended her funeral service, including former students who flew in from around the country and stood up to share remembrances.

No one has found records to determine if Weiss was the longest-serving educator in state history, Bachner said, but she added with certainty: “Vickie was the best ambassador for learning ever.”

The guest book from her online obituary should be required reading in colleges of education.

A few examples from among pages of entries:

Mrs. Weiss is a major reason I live the life I do today. Service to and empathy for others, and an understanding that justice is not a given were grounding ideals in my family, but Mrs. Weiss is the teacher I remember who reiterated those pillars and put them in context. I live in Chicago now, and remember our 5th grade field trip here fondly, but also remember Mrs. Weiss stating that we would see homeless people, and they are humans, not lesser-thans. And then we read a book called Monkey Island, about a homeless population in NYC to further elaborate that point….

I have made my career in serving underrepresented and disengaged populations, and Mrs. Weiss, along with my parents and grandparents, led me here.

As a college senior, there is one memory that particularly stands out. During one of our interactive learning sessions, Mrs. Weiss split the classroom into two groups for a debate. The first two opponents selected were to argue their position on whatever topic was proposed, on that day it was something to do with paint can sales. The clear winner would remain on the debate couch while their opponent was replaced by a teammate.

I grew more comfortable with each debate, working through the other side. Eventually, Mrs. Weiss joined the other team and moved to the couch to oppose my position. However, she then changed the rules forcing me to switch sides and argue from a different perspective. After we went back and forth a few times, she stopped, turned to the class and said, “Its important to understand where everyone is coming from. Without that, you will never be able to fully believe your argument.” She closed by turning to me and said, “You will make a great attorney one day.”

In July, I sat for the LSAT exam, the entry test required to apply for law school. I am eternally grateful that Mrs. Weiss believed in me which has deeply impacted my life. My sympathies to her family. She was incredible.

The past few days have been a rush of memories, contemplation, and reflection on the ways Mrs. Weiss shaped my life and the lives of so many in my hometown, this state, and far beyond. But really, not a week goes by that I’m not reminded. Everyone who reads these letters will have their own collection of moments that comprise the ways this quintessential teacher fostered their intellectual curiosity, sense of possibility, drive to make change, community awareness, artistic creativity, scientific enthusiasm…the list is too long. But the most important thing I realize, the older I get, is that she’s still teaching me every day. The way Mrs. Weiss approached not just learning, but living, made those things synonymous and continuous – for her students, our parents, for her community, and, I believe, for herself. We were all lucky to be a part of her life, and have the opportunity, every day, to carry on her legacy.