Rockford bus driver Russ Clark thought he was picking up children at Lakes Elementary School for a field trip on Tuesday morning, so he was concerned when Transportation Director Jacquie Fase asked him to turn off his bus and step inside the gym to observe an assembly. 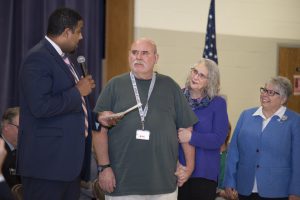 Russ Clark, flanked by wife Carla and MEA President Paula Herbart, listens to MDE Deputy Supt. Kyle Guerrant at the surprise assembly where he was named the 2019 Education Support Staff Professional of the Year.

“That was his first question—‘Is my trip cancelled?’” Fase said. “He was worried about being late.”

The next thing Clark knew, he was listening to Michigan Department of Education (MDE) Deputy Superintendent Kyle Guerrant announce his name as the winner of the statewide Education Support Staff Professional of the Year award.

The MEA member was recognized at a surprise assembly from among 250 nominees for his dedication to the students with cognitive impairments who ride his bus. The 66-year-old retired factory worker drives students with varied needs, ranging from elementary to high school age.

Shy and humble, he is known by passengers as fun and by parents as patient and attuned to children’s needs.

One of those parents – Beth Walla – is an MEA-member fourth-grade teacher in the district who understands that driving a bus is challenging in itself. Add in students with special needs, such as her non-verbal daughter Libby, and “It takes a special person,” she said.

A first grader in the Cognitively Impaired program at Lakes Elementary, Libby communicates happiness by squealing with gusto – and witnessing Clark accept his award elicited many squeals from Libby.

“He loves her like a grandpa,” Walla said after the ceremony. “To know when she gets on the bus with him, she’s safe and loved and cared for and her needs are taken care of. That’s priceless.”

It took a little arm-tugging on Fase’s part to move Clark up the aisle—through cheering kids who stuck up their hands for high-fives—to receive the honor. His wife Carla shocked him by joining him at the front of the gym, where she tucked a tissue in his hand and clutched his arm in hers. 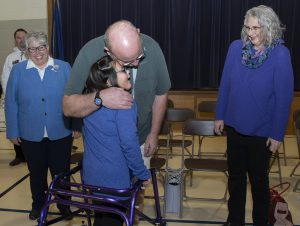 After the ceremony, Clark enjoys a congratulatory hug from Libby Walla, a first-grade passenger on his bus.

“I knew this would be uncomfortable for him,” Carla said later. “He does what he does because it’s the right thing to do. He doesn’t expect any accolades or recognition for doing what he loves doing.”

Clark dabbed at his eyes with the tissue and stared at Guerrant with a look of confusion as the MDE administrator praised him for getting to know students individually and showing them he cares.

“He attends their events at school and goes above and beyond for them, making sure they know they are valued members of their school community,” Guerrant said.

Clark began driving a bus 10 years ago, after retiring from 32 years at a GM plant that has since been torn down. Before marrying Carla 21 years ago, he raised two daughters alone. He has always connected with kids, and children with special needs are no different to him, he said.

“You treat them like they’re your own,” he said in an interview after the ceremony. “They have feelings. You’ve just got to listen and try to understand.”

Every child on his bus gets a card and gift on their birthday and treat bags at holidays and the end of a school year. Parent Jen Klaasen said her three children were thrilled to receive their own Subway gift cards from Clark which felt like credit cards. “He is respected by them and very well loved,” she said.

One year his students became interested in John Deere tractors, so Clark made a game of trying to spot the machines on their route each day. At the end of the year, he gave each student a John Deere baseball cap. 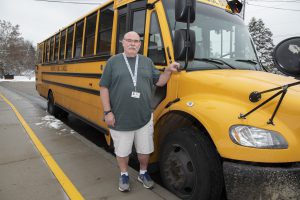 Known for being fun and kind, Clark says the children who ride his bus give back more than they receive.

The kids on his bus enjoy listening to Clark sing along to the radio, even though he’s not a great singer. “It makes the kids laugh, so I keep doing it,” he said. “It’s just another way to reach them.”

However, every day is not filled with songs and laughter. His kids struggle with many challenges, which can lead to meltdowns. Some children have ongoing physical issues, such as seizures, which can suddenly arise.

During an emergency, he has had to stop the bus to call 911 and contact parents.. Because he knows his students so well, he has prevented issues by recognizing a problem when it’s brewing and altering his route to get a child home sooner, supervisor Fase said.

“Going down the road, looking backwards in a mirror, he can tell if he’s got a kid in trouble,” Fase said. “That’s what is so amazing about him.”

Clark seemed uncomfortable with the praise. “They’re my friends,” he said of the children. “They need a lot of attention, but they give back much more than they receive. I’m just happy they think as much of me as I think of them.”

As part of the award – which made a return in 2019 thanks to a partnership with MEA, AFT Michigan, and AFSCME Council 25 – MDE presented Clark with a check for $1,000.