As a teenager in Oregon, Taylor was “a non-conformist for no good reason” except he didn’t like rules – earning him a thick file of detention slips in school (which he still possesses). Now he lives on the other side of the student-teacher equation, years after dropping out of high school and driving in his car until he ran out of gas money in northern California.

“That’s why, if I get a student that I think is difficult—it’s karma,” he quipped. “I don’t complain. I say, ‘I will do my best. I understand; I deserve this.’”

Taylor’s students call his class entertaining and fun but also relevant and inspiring, because he ties current events to learning about government systems and history with a combination of humor and engaging lessons and activities.

“He pulls in modern-day information and connects it to the material we’re learning, and he puts us in the place of government so we have to figure things out for ourselves,” said senior Raven Shilander, who was motivated to take AP Government after enjoying Taylor’s required government class. 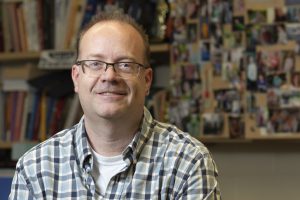 Despite his unusual path to becoming an educator, Taylor arrived exactly where he believes he was meant to be: teaching history, government, and economics to teenagers in the Holland-area district.

“I never had intended on being a teacher, never thought about it at all, and now I couldn’t imagine doing anything else,” he said.

On his circuitous route to public education, he labored in many jobs.

In 1989, 17-year-old Taylor arrived in Santa Cruz, California, without a plan beyond enjoying the SoCal sun and surf idealized on television shows such as “CHiPs” – a corny but popular 1970s drama about the California Highway Patrol.

Then he awoke from his first night sleeping on the beach doused with cold water from the incoming tide. He jokes it was his first big disappointment to learn the Pacific Ocean was cold in California, just like Oregon.

He slept in his car for a few months while learning challenging life lessons about rental prices and apartment deposit requirements. He worked odd jobs – delivering hot tubs, sorting phone books, and assembling product packages at a Lipton factory.

Taylor describes the tea and soup assembly line he worked on – outfitted with ear plugs and a hair net for his long (mullet-styled) hair – with a reference to the classic “I Love Lucy” episode involving Lucy and Ethel and a too-fast conveyor belt of chocolate candies.

“If you sneeze or something goes on the floor, you’ve got to get it back; otherwise, you’ve got to push the (stop) button, and then you get yelled at,” he said. “It was super stressful and monotonous.”

The factory was hot in the summer, cold in the winter, and the misery spurred him back toward formal education. A Christmas potluck in the breakroom brought an epiphany: “I don’t want to be working here for 20 or 30 years. I don’t want to be here tomorrow, but I need to survive.”

An earthquake finally pushed him to go further south after the house where he rented a room was damaged and condemned. Tired of the cool and cloudy weather in the north, he moved to Santa Barbara – about 90 miles north of Los Angeles.

That’s when he found a two-year college offering open entrance exams. No diploma was required at Santa Barbara City College, and his test scores qualified him for the honors program. He joined student government, organized a fundraiser for Toys for Tots with a local biker group, and lobbied legislators for education funding—two years after dropping out of high school.

And he found the California he was looking for in a math class with a professor who taught in a tank top with his surfboard nearby. “As soon as his lesson was done, he’d say, ‘Catch some waves, but if you need help I’ll buy you some nachos.’”

Taylor also met the woman he would marry and follow across the country during her graduate studies and work pursuits. After the couple moved to New York, Taylor transferred to Binghamton University and graduated with honors and a double major in philosophy and political science.

He worked in television news in Manhattan before his wife’s post-doctoral work brought them back to California for a year. It was the infancy of the internet, and Taylor developed a freelance website development business that thrived.

However, sometime after the couple moved to Michigan, Taylor was working from home without much human interaction, becoming hermet-like with no incentive to shave or leave the house, he said.

His wife, working as a psychology professor at Grand Valley State University, asked him one day: “‘When’s the last time you left the house?’ I’m like, ‘What day is it?’ She says, ‘Thursday,’ and I’m like, ‘I think Monday I got the mail.’”

She recommended he “get a hobby.” Her advice proved to be fateful.

Taylor saw an ad in the local paper for small business people willing to teach Junior Achievement. He volunteered and was assigned to a class at Fruitport Alternative High School. He was warned that the kids were tough, but he recognized them when he arrived.

The students reminded Taylor of himself at 17: “They don’t want to learn; you have to convince them to learn.”

He was given some JA booklets and a curriculum for teaching microeconomics, but when the students didn’t respond he threw out the boxed lessons and followed his gut. He started relating the concepts to products and situations from the students’ lives.

Along the way he made jokes with the class, drawing smiles and laughter. “It was really fun going in there once a week for six or seven weeks,” he said.

In the end, the students asked their regular classroom teacher to invite Taylor for the annual Thanksgiving feast. He was visibly emotional telling the story years later. “That was meaningful for them to make sure I could come too—I think that’s what sold me on teaching.”

He returned to school once more – graduate school at GVSU – to complete his degree and student teaching while working full-time. His first position at West Ottawa was teaching eighth-grade history, where he stayed for four years before switching to the high school.

It wasn’t an easy transition to full-time teaching—Taylor says he wanted to quit after the first year, but a colleague convinced him, “Never make a decision after one year.” Finding the balance between being in control like the teacher books recommended and being himself was the challenge, he said.

Now he’s comfortable being known for his humor and for assignments that allow students to use a crazy prop closet to create movies and other projects that demonstrate their understanding of concepts. Taylor is active on social media and participates in Twitter talks to share ideas and build his network.

“It makes it more interesting than to sit and listen to me talk and say, ‘I know things because I’m a teacher,’” he said.

Last summer, he spent a week at a U.S. Supreme Court Institute sponsored by the nonprofit organization Street Law. The training and development for teachers encourages student involvement through simulations and other hands-on activities that apply content knowledge.

[The application for next summer’s institute in Washington, D.C., is open through March 11.]

Taylor also enjoys taking students on organized summer tours overseas. In his 16 years, he and student travel groups have visited 37 countries in six continents to encourage students to see beyond their own lives and cultures.

“Even the kids who don’t care about learning in the classroom can’t help but learn when we’re walking in the Colosseum where gladiator combat took place, and we are literally looking at the cathedral that Michelangelo painted, or we’re snorkeling the Great Barrier Reef.”

He doesn’t have all the answers for how to reach kids who aren’t engaged in school, who don’t put forth much effort, who can’t see their own future. But he tells students his own story so they know there is more than one way to arrive at their destination.

“A lot of them think if my grades aren’t good I’ll never get into a good school, or if my parents don’t have money, then I’m not going to college. I’ve been able to use my experience to help people see that they can.”

He knows some people take longer to find their path, so he doesn’t stop trying.

“I’m Facebook friends with kids that did nothing in school and now they’re successful, and they say, ‘Hey, thanks for never giving up on me.’”

Taylor’s unique perspective helps students see a variety of options and paths, said West Ottawa Education Association President Mary DePree. “Students connect to him because of his authentic spirit and love for students, regardless of where they are at in their life journey.”

There is no job more rewarding than teaching, Taylor said, and he would know.

When he first started teaching, some people asked if he wanted to pursue an administrative career track. “I said, ‘Never.’ I want four walls and a bunch of kids every hour, and for the rest of my life I don’t want to go anywhere else.”

Read a Q&A with Taylor about how he teaches government and history in an age of political division.