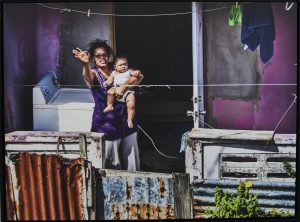 MEA-Retired member Lynn Gregg, whose photography entry won this year’s “Best in Show” award at the MEA-MAEA Art Exhibition, says he captured the winning shot while aboard a moving train.

Gregg was touring Saint Kitts Island in the Caribbean from an open-air train when he saw a smiling mother holding her baby and waving from her porch. “I saw something interesting, and I quickly tried to frame it and grab it, because it was nothing I could go back to,” Gregg said.

His winning shot, titled “Hurricane Survivors,” captures details that convey the island’s intense poverty, including a washing machine on the porch, which is strung with wire for drying laundry. The mother stands behind a fence of rusty corrugated metal, with signs of flood damage in the entryway behind her.

“It does tell a story with those elements we’re not used to seeing back in the U.S.,” Gregg said. “This was months after a devastating hurricane hit those islands, and it was typical of the homes people were living in. They were able to endure with very little.”

Gregg edited the photo to bring out color and details in ways that make the 30×40-inch framed work on canvas appear like a painting. “I’m not really into taking pictures of scenery; I’d rather show people in their surroundings,” he added.

Gregg worked for 36 years in Wayne-Westland and Brighton schools as a teacher, counselor, and assistant principal. He started out his career teaching journalism and newspaper, which forced him to learn photography – so he could teach it to kids.

From there, a building secretary asked him to take some photos at her daughter’s wedding, “and from one wedding to another and another, I ended up doing 400 weddings,” he said. After he became a counselor, Gregg took pictures of student activities, clubs, and sports for a photo collage wall outside his office.

His sports photos eventually got him noticed at an online sports news site, where Gregg got the opportunity to shoot home games of the WNBA’s Detroit Shock for a few years. He also took photos of Gordie Howe at several events after the hockey legend visited his school.

Perhaps Gregg’s coolest claim to photography fame relates to comedian and actor Steve Martin. Years ago, Gregg grabbed a shot of Martin from his television set when the performer was dressed in his Saturday Night Live “King Tut” costume for a comedy routine.

The grainy shot had an artsy feel, and Gregg wanted to get it to the comedian, so he bought tickets to a Martin show at a local concert venue. Somehow, Gregg talked his way backstage, Martin loved the picture, and Warner Bros. Records bought the rights for $400.

The photo wound up on the back of Martin’s blockbuster 1978 comedy album, A Wild and Crazy Guy.

“Photography has been a great way to meet people and do different things,” Gregg said.

Dr. Jason Cox, who judged Gregg’s winning shot in the exhibition, said he considers art a visual discourse that connects artist and viewer through barriers of time and space – no small feat.

In choosing award winners, Cox said he considers technical proficiency, formal elements, and originality – but he also ponders tough questions: What does it mean today? What might it mean tomorrow? How might its presence affect a life?

“I believe that ultimately, real art is more than skill, though that is certainly a part of it,” said Cox, assistant professor of Art Education at the University of Toledo. “It is the stuff of humanity.”

View a video slideshow of entries in this year’s exhibition at www.MEA.org/art. The 54th annual exhibit, co-sponsored by MEA and the Michigan Art Education Association, can be viewed at MEA Headquarters, 8 a.m.-5 p.m. Monday-Friday through April 18.