A Message From a Mid-Career Teacher in Michigan

Like many mid-career teachers in Michigan today, English teacher Maureen Horan can document the decline of her income starting in 2011. 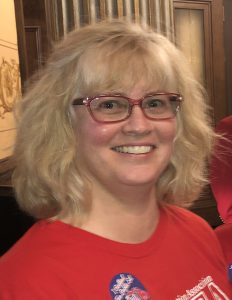 Not only did her salary decrease that year, but new state laws deducted more money from her paycheck for health care premiums and retirement which ate into her take-home pay.

A 21-year veteran of Walled Lake Consolidated Schools, Horan says it took nine years to return to the salary she was making in 2010 in real dollars, not adjusted for inflation. In 2011, Republicans took complete control of state government and pushed through a $2.1 billion corporate tax cut partially funded by a $1 billion cut in education spending.

“Our salary hasn’t increased to what it should have been, and we’re paying more toward our health care than we were in the past, so we’re still not making what we were 10 years ago because our benefits are costing us more than before.”

Annual data released by NEA in April showed average teacher pay in Michigan declined 12 percent over the past decade. Last fall, Time magazine illuminated the realities of low educator pay in a powerful series, 13 Stories of Life on a Teacher’s Salary.

The problem is not confined to teachers, Horan points out. Education support professionals, such as paraeducators and secretaries, face income, staffing, and workload issues, while privatization continues to erode pay and quality of services in areas such as custodial, maintenance and transportation.

For those reasons and more, Horan rallied at the Capitol last week to push lawmakers to increase state education funding as numerous recent studies have recommended. The most comprehensive study of Michigan’s support for public schools revealed a shortfall of nearly $2,000 per student.

Horan hopes even more people will show up for a second rally at the capitol tomorrow. Join us – check-in begins on the Capitol Lawn at 11 a.m.

“Schools aren’t hurting because of bad budgeting or mismanagement,” Horan said. “They’re hurting because we’re not funding education at the level it actually costs to educate our children.”

Horan began her career in education in 1998 and has watched conditions for schools deteriorate as the state “continued robbing Peter to pay Paul.”

A study published by researchers at Michigan State University in January revealed the state ranks 50th in the nation for increases in education spending over the past 25 years. Michigan’s funding for education fell 38 percent between 2002 and 2015, the study found.

“If we don’t start spending more on education, I worry it’s going to continue down this spiral,” Horan said, adding that moves to undermine public education and shift toward privatization were “systematic” beginning with Gov. John Engler in the 1990s.

Before becoming a high school English teacher, she worked as a public relations professional in Lansing until she became disillusioned with trying to manage what people think. “I thought, gosh, what if I went back to school and became a teacher and taught people how to think?”

It’s clear Horan loves her job—and her profession. As her frustrations grew over the years, so did her involvement in the union as a building representative and delegate to MEA’s Representative Assembly.

“My response has been to become active,” she said. “I’ve been more actively asking people, ‘What are your concerns? What are your issues?’ And they are frustrated. They’re tired of taking concessions and feeling like they’re always giving and not getting anything back in return.”

Class size is the number-one concern she hears about from other educators, she said. As a personal example, she routinely has 35 students in her English classes, which makes it difficult to grade and return work in a timely fashion.

Simply spending 15 minutes per essay with 150 essays means it takes 37 hours to grade one set of papers. That is in addition to all of her other teaching and grading duties. For many teachers, the workload from school is shouldered along with a second or third job needed to pay bills.

Other frustrations her colleagues express include rising out-of-pocket health insurance costs, crumbling pensions, poor quality of privatized services, and over-testing and data collection that reduces time to do the real work of teaching and assessing that educators are trained to do.

“We’re constantly being asked to document more and not really teach, and you spend this time testing and documenting and it doesn’t go anywhere. Nobody really looks at it.”

Yet Horan refuses to stop fighting for the public education system that students and parents deserve. She found hope at last week’s rally, watching speeches from former teachers who were elected to state House and Senate seats last November.

“Just look at all those folks who were educators and now they’re in positions of leadership to help make the decisions that we need to see made for education and for our communities. So we’re getting there; it’s just a slow and painful process.”

That is her message to others who worry about the future of public education in Michigan: “Show up. Understand what’s going on, and get involved to help make a difference.”

Learn more about the June 25 #RedForEd rally at the Michigan Capitol, and join our fight to win the funding our students deserve!